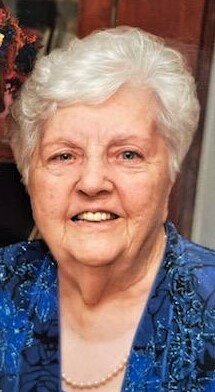 She was born in Clydebank, Scotland, on March 21, 1932, to mother Jane Campbell Granger and father Matthew Hamilton Granger as the youngest daughter in a family of nine children.  She completed her early school years in Scotland, but left at a young age to work at Singer Manufacturing Company, in their Time Office.  She loved school, but her high school diploma waited until 1984, when she completed her GED at Parsippany Hills High School.

She met her future husband, Norman Neilson, while working at J & T Lawrie.  They married in 1956 and immigrated to Canada from Scotland and then again to the US where they eventually became citizens. Settling in NYC, then Staten Island, NY, then Denville, Long Valley, and finally Washington, NJ.   Jane worked for many years at the Washington Township Library while in Long Valley, and retired in 1996.

Affectionately known as “MacGyver” by her husband for her knack for assembling or fixing household items, Jane was more than proficient in all her hobbies, including gardening, baking, knitting, sewing, reading and crossword puzzles.  All of which she shared graciously, with her love of life, and her fierce love for her family.

Norman predeceased Jane in 2006, the year of their Fiftieth Wedding Anniversary.  She is survived by her daughters, Carol, with husband Robert Colon, of Washington NJ, and Barbara, with husband Charles Tirrell, of Holland Township NJ.  Her grandson Brian Colon, with wife Jessica and great granddaughter Morgan Colon of Bethlehem, PA; A granddaughter Jenna (Colon) with husband Adam Dickey of Phillipsburg, NJ.  Her Brother Matthew Granger and his wife Jean Granger of Carnoustie, Scotland, and a long list of nephews and nieces.

A private service will be held at a later date, when plans can be made to join Jane with Norman again, in Scotland.  Special thanks to the caring staff at Country Meadows, Forks Twp, PA and her friends at Broadway Methodist Church.

Share Your Memory of
Jane
Upload Your Memory View All Memories
Be the first to upload a memory!
Share A Memory
Send Flowers